Disorders of the Diaphragm

Understanding Disorders of the Diaphragm

As with any organ or muscle, the diaphragm is subject to disorders and abnormalities, which come in many different forms and can stem from injury or illness. When the diaphragm is impaired, breathing becomes labored, difficult. Severely ill patients have to rely upon a ventilator, a machine that removes carbon dioxide from the body and forces oxygen into the lungs.1

In people with COPD, the diaphragm is weakened, and it doesn’t work as well as it should during the breathing process.1 In these patients, the capacity of the diaphragm is reduced due to lung hyperinflation, which shortens its muscle fibers and places the diaphragm at a mechanical disadvantage by having it contract on the steep part of its length-tension curve. Diseases presenting with chronic lung hyperinflation such as COPD are a frequent cause of abnormal diaphragm contractility. Research shows that weak diaphragm muscles can worsen COPD, potentially leading to exacerbations.2

Disorder of the Diaphragms in COPD Patients 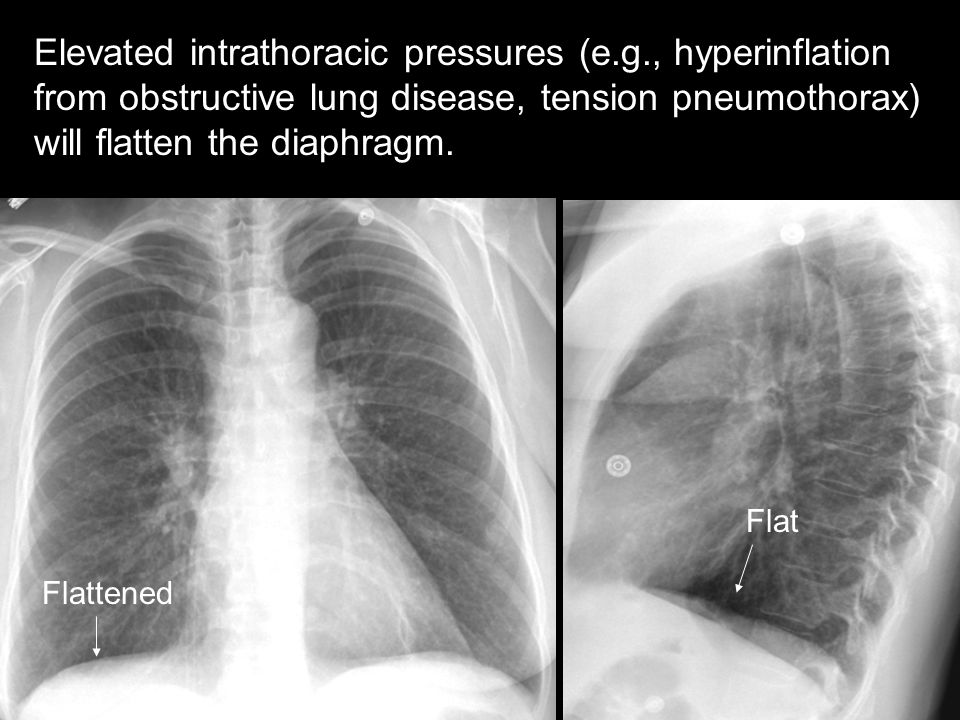 A chest X-Ray image of COPD patients may reveal enlarged lungs, a flattened diaphragm, or potentially dangerous air pockets in the lungs. The diaphragm may appear flattened in the chest as a result of hyperinflation as the lungs push against the diaphragm forcing it downward.3 Chronic airflow limitation imposes a load on respiratory muscles as does lung hyperinflation, flattening the diaphragm and reducing its ability to generate tension.

A recent study indicates that respiratory muscle impairment occurs early in stable COPD. This is important for predicting disease outcome and emphasizes the importance of early therapeutic interventions before the occurrence of manifest ventilatory insufficiency.4 These findings also have therapeutic implications as it has been seen that in hospitalized patients with acute exacerbation of COPD subjected to noninvasive ventilation (NIV), severe diaphragmatic dysfunction as measured by diaphragmatic ultrasound was seen in almost 25% of patients. Diaphragmatic dysfunction was also associated with NIV failure and short-term mortality in these patients.4 AffloVest mobile during use mechanical HFCWO therapy provides patient-specific therapy with 8 anatomically positioned oscillating motors to create individual pressure waveforms to target all lobes of the lungs, posteriorly and anteriorly, to loosen, thin and mobilize lung secretions. It is designed to mimic the gold standard chest physical therapy (CPT). The battery powered AffloVest is designed to increase therapy adherence through mobility. The ability to do airway clearance therapy on the go while performing normal, daily activities can provide more consistent therapy compliance and an improved quality of life.

A recent retrospective study showed that patients with COPD and without bronchiectasis showed changes in hospitalization rate as well as self-reported outcomes of respiratory health and ability to clear secretions with the use of high frequency chest wall oscillation.7 According the study, HFCWO vests appeared to reduce COPD exacerbations. After 24 months of wearing the vest, patients achieved a 54.4% reduction in the annualized hospitalization rate for respiratory causes.7

COPD patients can be prescribed AffloVest Mobile HFCWO therapy with the diagnosis of Disorder of the Diaphragm. It is necessary there are thorough chart notes indicating clear progression of the disorder and that other treatments aimed at mobilizing secretions have been tried and failed or thorough documentation of why other treatments would not be sufficient or are not an option for a specific patient.